Radiation emergency drill has been held in Andreeva Bay 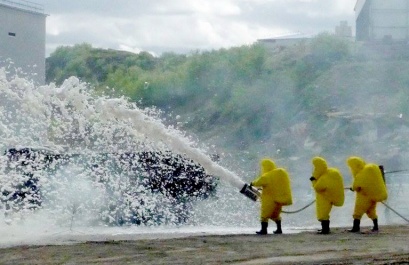 June 1-3 a radiation emergency drill concerning the transportation of the spent nuclear fuel (SNF) has been arranged in Murmansk region. There participated the representatives of State Corporation «Rosatom», FMBA of Russia, Ministry for Emergency Situations, Institute for Sustainable Development of Nuclear Energy of RAS, Rosgidromet’s Taifun, committee for the accident prevention in Murmansk region, regional civil defense agency, NRPA and other organizations. The drills were managed Director of RosRAO’s subsidiary NWC SevRAO Valery Panteleev.

The aim of the drill was to perfect the cooperation between State Corporation «Rosatom» and FMBA of Russia by providing emergency operations by removal of radiation accident by transportation of spent nuclear fuel.

In accordance with the scenario as a result of the fall of a helicopter on transported SNF the hermeticity of the transportation pack has been infringed. The radiation monitoring sensors stated the radioactive contamination of the environment. A fire broke out at the location. Damage to several people occurred.
«The situation of the hermeticity infringe of the packing is close to impossible. All packings are certified, and in order to get certified the manufacturers arrange lots of tests which are really stringent» – commented Director of the Department of Nuclear and Radiation Safety, Licensing and Authorization in «Rosatom» Sergey Raikov.

«The staff demonstrated joint and professional actions to remove the radiation accident by the emergency drill. This scenario is hardly probable, but we must be ready to any situation», – concluded the head of the emergency drills Valery Panteleev.

Malgozhata Karpov Sneve highlighted in her turn that politics should not influence the international cooperation in the field of nuclear and radiation safety.  «Russia among the other countries can show the world what standards are accepted and share the experience. Many countries have the same legacy but not all of them show how these problems are being resolved», – she stated.