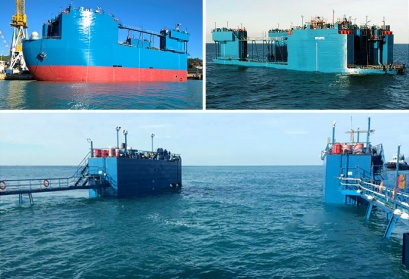 The representatives of Fincantieri and RosRAO arranged a meeting in Moscow, at which the Italians reported on the works that had been performed within the contract for building a floating semisubmersible platform Itarus for the needs of North-western center for radioactive waste management SevRAO (RosRAO's subsidiary).

The vessel was commissioned in November 2015 and the final stage of preparation of its transportation to Russia has begun. The Russian crew finishes the trainings at Fincantieri shipyard, and the contracts for transportation of the platform to Russia are about to be concluded.

Semisubmersible floating platform Itarus is dedicated for transportation of 3-compartment units of the decommissioned NPS at SevRAO's Sayda Bay branch.   The works are financed by the Italian Ministry of Economic Development within the cooperation agreement between the Russian and the Italian government for the decommissioning of nuclear submarines and the safe management of radioactive waste and spent nuclear fuel that has been signed in Rome on November 5, 2003.